Mushroom season in California has long passed.  I could make dyes using frozen or dried mushrooms, but I like to focus on what‘s in season. Mushrooms remind me of autumn: crunchy leaves, carving pumpkins, and rain.  I can’t go there right now, not when my family’s consuming mass amounts of watermelon, and my garden is in full bloom.

I’m celebrating summer by creating natural dyes from the plants in my garden, starting with coreopsis. 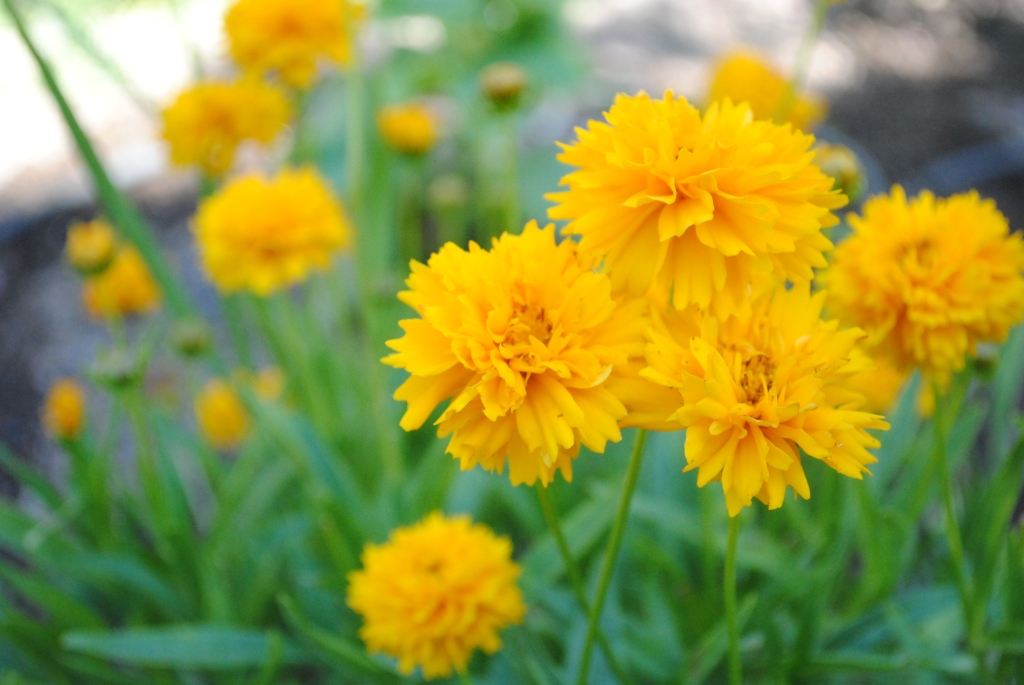 I did my best to scribble down notes with each skein, however my dyeing tends to be impromptu and done in stages. I collect the flowers and throw them in a pot of water to soak.

When I have a quiet moment  (which is extremely rare these days with my kids home for summer), I throw a  skein of wool into the pot, and simmer it until the color changes and I achieve a result I like. Therefore, my note taking has been limited to the one index card that lives next to my dye pot as a reminder to document my results.

My goal was to  produce shades of yellow dye, and hopefully orange. So I was ecstatic to create vibrant shades of each. Oh, and red, too!

I used 2 ounces of fresh blossoms and 1¼ ounce skein of alum mordanted wool. I soaked the flowers in cool water for 90 minutes, added the yarn, and brought all of it to a simmer. The color of the water began to change after 20 minutes or so. I pulled it out after another 30-40 minutes and discovered the yarn changed to a brilliant orange. Wow! I poured the dye into a large mason jar, and threw in an unmordanted skein of yarn to stew in the after bath. The result was a mellow apricot color. I used this skein again in my third experiment.

I used a new batch of flowers,  about half as many of the first dye, and soaked them in water for 24 hours. I simmered them with an unmordanted skein (about 2 ounces); after 40 minutes I pulled it out and discovered a vibrant yellow. I’m not sure why I received such a different color from the first batch, but I assume it’s because I used half the amount of flowers.

This was my “use up what I already have” experiment: two separate dye baths stored in mason jars, one orange and one yellow, skein of pale orange color, created from the afterbath of the first dye. This was one of my classic impromptu moments of throwing what I had on hand together in a pot to see what would happen.

This was my first time using an additive. An additive, which can be acidic or alkaline, can be added to the dye bath (after the yarn has been dyed and removed) to change the color. I read that an alkaline additive, such as washing soda, will bring out the pinker tones. I used the left over dyes (now a honey color), added another 2oz skein of unmordanted wool, brought it to a simmer, and let it sit in the dye. After two days in a cool dye, to became this lovely orange.

I removed the yarn and added 1/2 teaspoon of washing soda to the dye. When the washing soda hit the dye, that spot became a cloud of red. I added another 1/2  teaspoon, thoroughly stirred the dye, and added the skein. I did not heat the dye, but let the skein sit in the bath for several hours. The result was a red. I will admit, I totally squealed.

My plant is still producing flowers, which I’m picking and drying to use at a later date. However, there are other plants in my garden that I’m eager to experiment with, such as privet, blackberry, and apricot tree bark. This will be a busy and colorful summer.

I used the following books as general guides:

It look longer than expected but finally- fit test complete. 🥳
For this sweater I decided to break a colorwork rule: contrast.
Loading Comments...
%d bloggers like this: